HAGIA SOPHIA; Opening Hours, Entrance Fee, How to Get, What to See?

Hagia Sophia (meaning “Holy Wisdom” in Greek) or Ayasofya in Turkish, is the first cathedral of the world and located in Istanbul, the biggest city of Turkey. It is also the first church with a large dome and not in basilical plan. Built in 537 AD, Hagia Sophia has been one of the symbols of Roman Empire, Byzantium, Ottoman Empire and modern Republic of Turkey for 1500 years. Hagia Sophia was an Eastern Orthodox Church and ecumenical patriarch of Constantinople until 1453 and later on the Imperial Mosque in Ottoman Empire. Hagia Sophia is one of the most important masterpieces in the history of architecture and most visited touristic attractions in the world. It is a very special and unique structure in terms of size, magnificence, historical, artistic and cultural value. 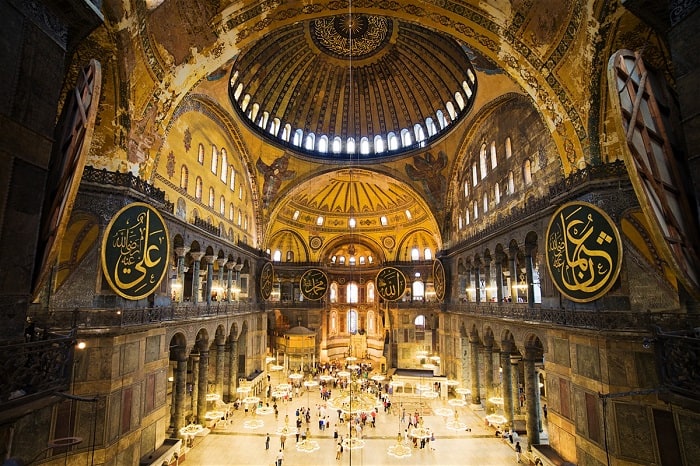 Hagia Sophia is considered to be the oldest cathedral and has been the largest cathedral in the world for nearly 1000 years since its opening. This building, which has been used as a place of worship for centuries, retains its importance in the same way after Mehmet The Conqueror conquered Constantinople; it was used as a church for 916 years and as a mosque for 482 years (except between 1204 and 1261, when it was converted by the Crusaders to a Catholic Cathedral under the Latin Empire). Mehmet the Conquerer was a leader that respects all religions and cultures. For this reason, he managed to protect all the institutions and Hagia Sophia remained from Byzantium. Although he added a minaret and some more Islamic elements, the precious Byzantine mosaics inside the building are saved and he strengthened the whole building which was not strong enough against earthquakes.

In the 16th and 17th centuries a mihrab, pulpit, two lodges for muezzin and sultan (maksure) were added. Hagia Sophia was transformed into a complex during the Ottoman Period with four minarets, a high school (madrasah), secondary school, fountains, sundials, chamber of trustees etc built outside the building in different periods.

Hagia Sophia was converted into a museum in 1935 upon the order of Mustafa Kemal Atatürk (the founder of modern Turkey) and the decision of the Council of Ministers. 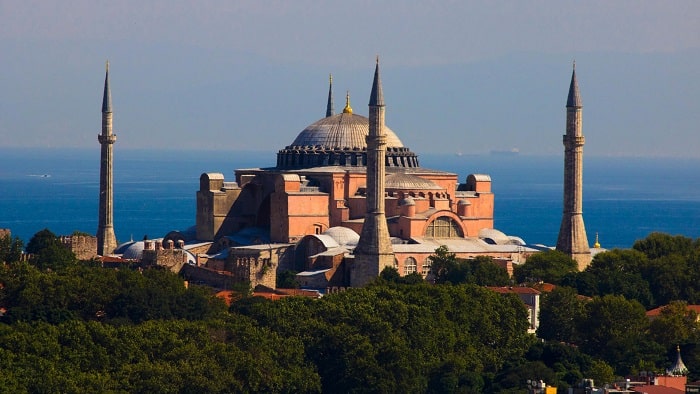 Where is Hagia Sophia And How To Get There? 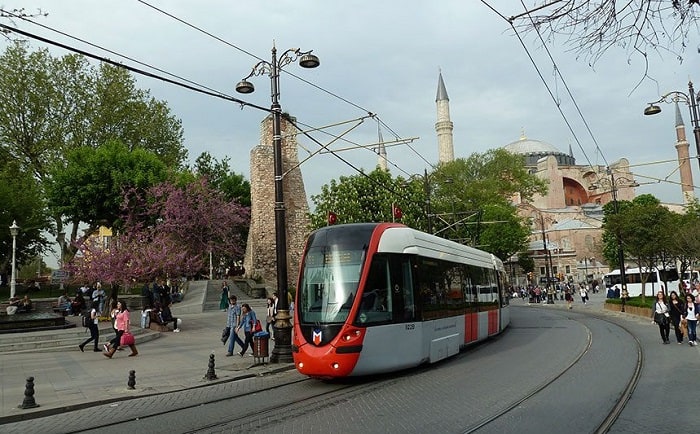 Hagia Sophia was built in the same place three times and the last one is the largest church built in Constantinopolis (Istanbul) by the Eastern Roman Empire.

The first church (Megale Ekklesia) was built in 360 AD by the East Roman Emperor Constantine. The first building, which was covered with a wooden roof and has a basilical plan, was burned and destroyed during an uprising after the disputes between Empress Eudoksia, the wife of Roman Emperor Arkadios, and the Patriarch Ioannes Chrysostomos (AD 404). You can see the mosaic depiction of Patriarch Chrysostomos on the northern tymphanon wall of today’s Hagia Sophia. Today, although there is no any remnant belonging to the first church, the bricks stamped as Megale Ekklesia in the museum warehouse are thought to belong to the first church.

Second Church was rebuilt by the Emperor Theodosios II in 415 AD. It is known that this building has a basilica plan with five naves, a wooden roof and a monumental entrance. This church was again destroyed by the people, during the great rebellion (Nika Riots) against to Emperor Justinianos on January 13, 532. Some pieces remained from this building to the present day are; the marble steps, column bases and reliefs with lamb figures representing the apostles and some friezes belonging to the monumental gate (propylon) of the building. 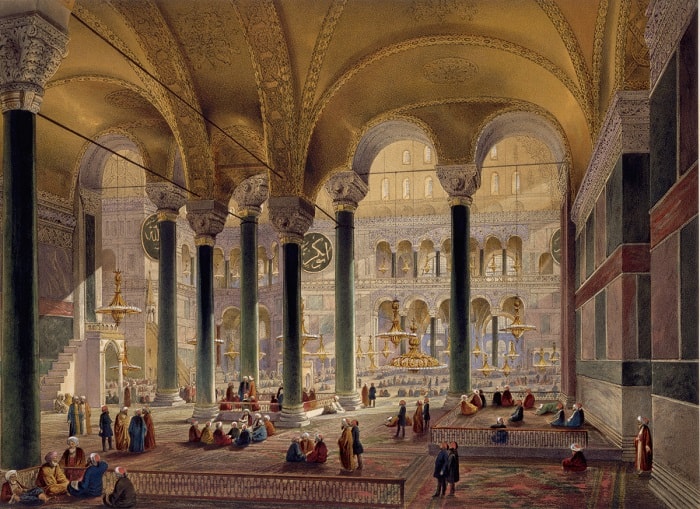 Hagia Sophia (the current church) was built by Emperor Justinianos. The architects was the two important architects of the period; Isidoros of Miletus (Miletus) and Anthemios of Tralles (Aydin). According to the historian Prokopios, the construction, which started on February 23, 532, was completed in as little as 5 years and the church was opened on December 27, 537. According to the written sources, after the opening of Hagia Sophia, Emperor Justinianos entered to the temple and shouted, “Thank God for giving me the opportunity to make such a place of worship” and “O Solomon, I exceeded you” by referring to the Temple of Solomon in Jerusalem.

Emperor Justinianos wanted Hagia Sophia to be more magnificent and flamboyant. For this, he sent messages to all the states under his administration and ordered that the most beautiful architectural pieces to be collected for using in Hagia Sophia. Columns and marbles used in this structure was brought from the ancient city ruins in Anatolia and Syria, such as Aspendos, Ephesos, Baalbek, Tarsus. The white marbles in the structure were brought from Marmara Island (Prokonnisos), the green porphyries from Euboea Island, the pink marbles from Afyon and the yellow marbles from North Africa. Symmetrical shapes were revealed in the wall coverings in the interior by bringing the marbles in a single block by dividing them into two. Decorative richness has been created by using marbles with colored veins. In addition, the green columns that were used in the naves brought from the Temple Artemis of Ephesus and 8 porphyry columns under the semi domes brought from Egypt. In total there are 104 columns in the building, 40 of them are in the lower gallery and 64 in the upper gallery. 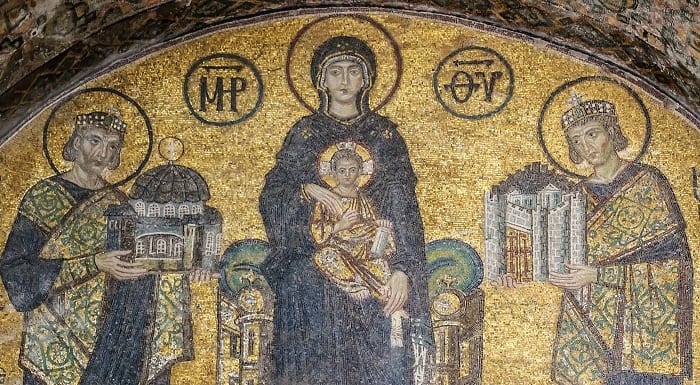 What To See In Hagia Sophia

The most important innovation in the architecture of Hagia Sophia was that the dimensions of the structure. It was larger than usual for a church and the size of the dome that dominates the building and its height from the ground. 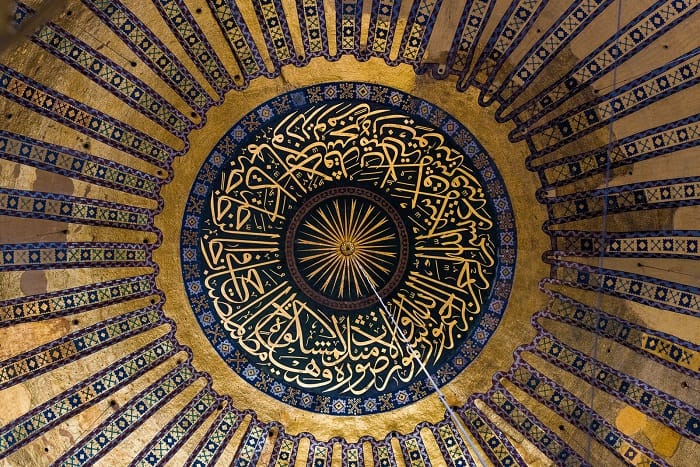 Mostly marble, stone and brick were used in the construction of the building. In order to prevent the dome from collapsing in earthquakes, specially produced light and solid bricks from Rhodes soil were used.

Hagia Sophia is adorned with many magnificent decorative and figurative mosaics in various periods. The most important and oldest examples of these mosaic decorations are the figureless mosaics that can be seen in the narthex area.

It is supposed that all the figurative mosaics in the building were removed during the iconaclasm (destruction of icons and other images or monuments) period during the Byzantine rule. The mosaic figure on the apsis ceiling is the first figurative mosaic made in Hagia Sophia after the end of this period in 843 AD.

You can see figurative mosaics designed in various periods in different parts of the building, especially in the upper gallery, tympanon wall, narthex, vestibule entrance and the rooms of the priests. 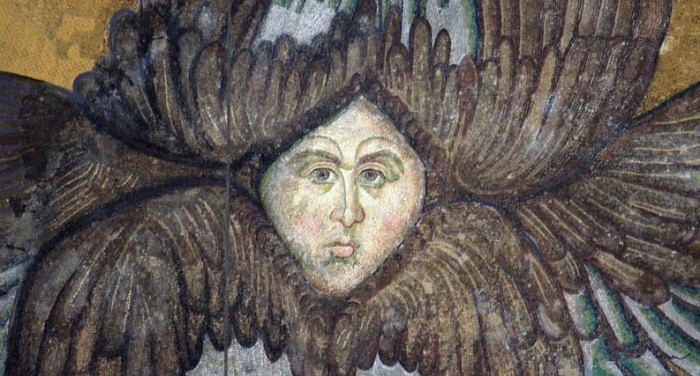